Sorry about the subject, but it's the best I could think of.

I have a lot of the smaller cookbooks from the thirties, and forties, and fifties, and I had to just toss them in the paper recycle. I'd be happy to pay shipping (as long as it's in the continental US, sorry, Alaska and Hawaii) to anyone that seems like they'd like them. I have some pictures, however, the canning books in those pictures are NOT included. In addition, I think there's more books than this shows. 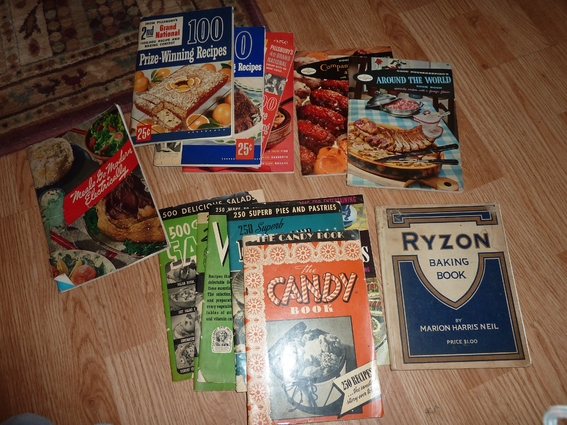 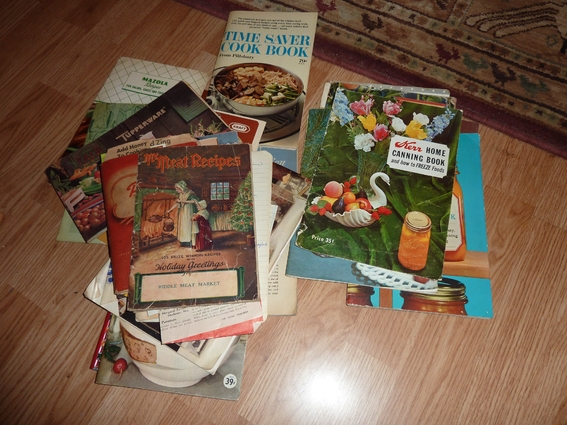 (Ryzon was a brand of baking soda, in long ago times) 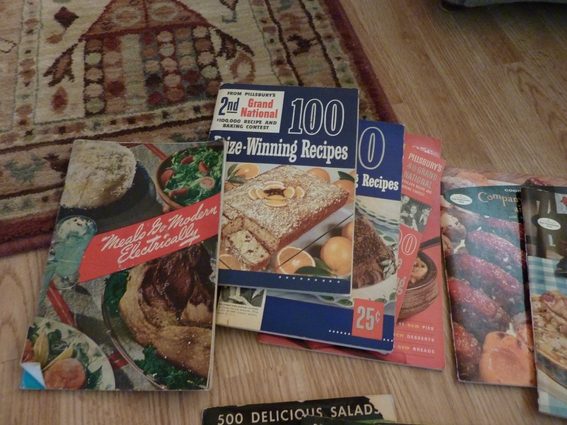 (These are the first few Pillsbury Bakeoff Cookbooks, except not the very first.) 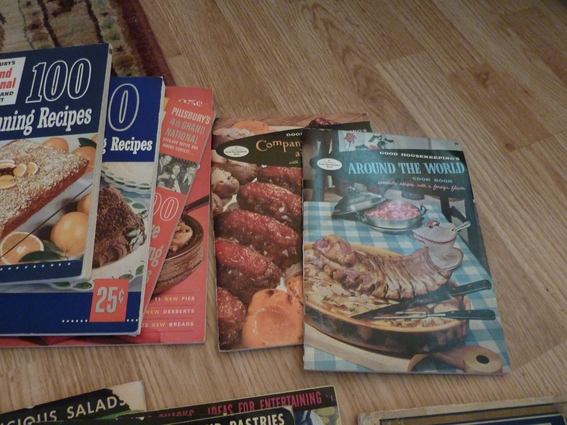 They've been spoken for. I'm leaving the pictures up, though (because lazy).

>2 Lyndatrue: And because they are fun to look at. :) Glad they found a home.

When I saw the word "recycle" my heart stopped! I am so glad they found a good home.

BTW, newbie here. My name is Chibitika. Nice to meet you.

I have some old ones from my mother that are so stained and horrible nobody would want them, but I'm loathe to let them go. Lots of good memories in those sticky, discolored pages.

Varielle, those "stained and horrible" cookbooks from your mother are still good enough to use! Some of us care more about the content than the condition of the book, because we use the cookbooks for cooking or reading, or both! Not just for collecting. Another perfectly good use for them is a good ol' trip down memory lane. Sounds like they are still in use!

I'm slowly adding my collection here on LT. I've got more cookbooks than anything else. Holy cow! I've never counted them, but I didn't think I had over 600 and I'm still not done!
A lot of these are ebooks. I used to get a daily email listing free Kindle cookbooks available on Amazon,and I "bought" almost all of them because I wanted to build a reference library. Amazon changed something about their site and the company that did the email could no longer identify the day's free books, so that feast is over and done with, but I'm not complaining. I've got a tidy little reference library that I've used many times.
I also have a lot of vintage and antique cookbooks. I'm planning on doing something really interesting with them some day, like a blog, but I'm not working steadily on that project yet. My house was burglarized and vandalized and I'm still trying to get everything in order. I haven't been able to tell if the filthy slobs who did this stole books from me, that is how bad the vandalizing was, but I do know they ruined lots of books by walking on them with their big fat muddy/poopy feet (you don't want to know). I've had to throw out a copy paper box full of cooking booklets and pamphlets, and some paperbacks and hard covers. But, really, I'm still left with over 600 books, so I shouldn't whine too much over the loss. It could have been so much worse, I know.

This is very nice and most important topic for each and every peoples cooking is one of the most interesting work more than one peoples are interested to cooking. it have a education oriented studies more than one courses are available from this cooking. i am a writer i had write for more than one cooking related essays it all are in custom essay writing service it will give us the best choice of writing service for your academic life.

>8 chibitika: I found all those books (the ones I gave away) in various estate sales and in second hand stores. With the exception of a few fashionable cookbooks, they're literally a dine a dozen. The ones above were, for the most part, duplicates. I do love my old cookbooks, many of which have not been entered here on LT. Someday. Maybe.

Are Australian Women's Weekly Cookbooks from the 90's vintage? Anyway, I'm discarding a pile, and will gladly mail them anywhere within the EU.

There will be at least 10 when I am done, but that may not be today.

11>MarthaJeanne: I do think cookbooks from the 90's could be called vintage. I hope you find a good home for them. Believe it or not, a cookbook of Australian food and some editions of Australian Women's Weekly Cookbooks showed up at a local library book sale here in southwestern New York state. I was so excited! But I put them back on the shelf - I am willing to substitute some ingredients, but there were so many that I had no access to, and so many that I didn't even know what they were, that I knew I wouldn't be doing the recipes justice. Somebody bought them, because they were gone the next day. There's this one sea creature that is supposed to be like a combination of lobster and shrimp that sounds absolutely heavenly! It is Australian, isn't it? Fat chance I'll ever be able to get my hands on one.

>12 chibitika: Those that don't get mailed out will go to a charity book sale here in Vienna.

I have several really good Australian cookbooks, and since I do a lot of substitutions all the time, I'm happy to accept inspiration from lots of different places. It's worth noting that Australian standard measurements differ from both US and UK standards. Most important is the tablespoon. Both US and UK it's 15 ml. Aussie is 20!

>Lyndatrue: I think those old booklets have so much charm!

>13 MarthaJeanne: MarthaJeanne: Thanks for the tip about Aussie measurements being different. I assumed they were the same as UK.

Don't get to disheartened at not having the ingredient/s that are listed in a recipe often it's just a matter of local terminology and/or simple or imaginative substitution.
Yes the 'standard' measure is a bit of a misnomer. There are web sites that will help you out.

Well, I took out a stack of cookbooks from my shelf to give away, but my daughter didn't want them. So I sat down to note in my LT catalog which ones were going, and by the time I got to the bottom of the stack (about 15 books) I had put all but two back on the shelves. :/ I'm not very good at this.

>17 MrsLee: Well, it did my heart good to read through this thread, and then I laughed at your dilemma, because I do this all the time. When I reduced my library several years ago, I used various metrics on whether I could keep a book, and one of them was emotional attachment. The cookbooks I got rid of (in the photographs above) were all from estate sells, and many of them were duplicates of books I already had. It would have been impossible for me to let that many books otherwise. I don't think I own many cookbooks that don't have at least one or two recipes that I made often, in earlier years. Many of them still get used, and I cannot imagine letting them go.

I'm sorry to hear that your daughter doesn't want the cookbooks, but I'm very sure my daughter doesn't want most of the ones I have, either. I've actually found copies of the few that she liked, and the canning books will be one of the things she keeps, as well. The others? I should probably just take many of them off the shelves, and donate them to the library for their next book sale...except that I love them, and would feel the loss.

>18 Lyndatrue: I don't even use recipes to cook with much anymore, but I do use them for reference. When I am trying to wrap my head around a certain concept of cooking, or culture. The ones I had pulled were mostly historical or "other cultures." They were published in the '50s or so and I know that I can find more modern versions online or better cookbooks for the subjects, because we have so much more access to ingredients now. However, there is something information-wise in each that I couldn't decide to get rid of them yet.

After all, I was only clearing the shelf for the theoretical need of space, not actual. It won't be actual until my mom finishes reading the memoir of Jacques Pépin The Apprentice: My Life in the Kitchen. That is one which will go on that shelf. That particular shelf is dedicated to books about cooking which are a pleasure to read, and possibly have some good advice/recipes, but are not really cookbooks.

I found I wanted to keep the historical cookbooks for now though, because I have recently become interested in fermentation and making everything we eat from fresh ingredients, including condiments. The historical books have some very good advice on that.