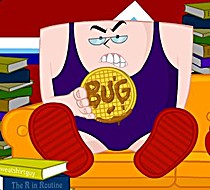 That's really about it.

Oh, and a new King's Quest. Preferably one that doesn't suck.

La mia bibliotecaI buy the vast majority of my books used. I browse about the library book sales and a couple secondhand shops I know, looking for anything with a byline I might recognize as worthwhile.

A number of my books are rather old, at least by the standards of these things. Put it this way: I don't own any books that could be considered antiques. A few were published in the 20s. (My 1925 edition of Ingersoll's 44 Complete Lectures had a calendar page from 1936 in it; somebody was using it as a bookmark.) Several are from the 30s and 40s, and I have dozens from the 50s.

A large percentage of my library is science fiction. It's not a coincidence that a majority of my SF books were originally published in the 40s, 50s and 60s; my interest in newer SF is... considerably less.

GruppiComics, NPR Listeners, Science Fiction Fans, What Are You Reading Now?, What did YOU buy today?