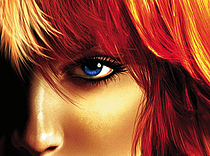 Informazioni su di meJust recommending that folks spend a bit of time each week at Free Rice expanding your vocabulary and spending time helping those in need! It's the perfect multi-tasking hobby for the literate.

Did you know that LibraryThing has awesome widgets? They once had a widget contest and somehow mine was one of the Top 5! You can steal the design if you like. And yes, I was thinking of the Watchmen cover when I designed it!

Books are usually my refuge for ongoing goals. I've been working through various goals on 43Things (you can always search my library for the 43T goal tag). But they have an equally addictive companion site, Lists of Bests. I have adopted nearly 150! Many of my lists are devoted to movies, but you can search my catalog for all Lists of Bests tagged books' devoted to book lists I'm tackling!

I am also working on a 50 State Challenge where I'd like to read one fiction and one non-fiction book set primarily in each state (plus Washington D.C.). I've taken advantage of Lists of Bests to set up my own personal list. Alternatively, I'm using the tag 50 State Challenge and noting the state as a tag when I've logged the book.

La mia bibliotecaI've long been of the "there's always room for books!" variety and have been lucky to live in book-friendly places. I've gone through several phases with collecting thus far - modern first editions, the classics, cookbooks and several half collections that make sense only in my head (odd-sized matte covers). I'm still cataloging and realizing that I have a great deal of reading to catch up on...

Would love to see this expand to DVD thing as well (someday!) since I also love films.