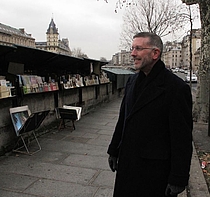 My work as a writer has appeared in the United States and Europe since the early 1980s. My publications include "Displaying the Queer Past: Purposes, Publics and Possibilities at the GLBT History Museum," QED: A Journal in GLBTQ Worldmaking, vol. 1, no. 2 (summer 2014); "Une amitié source d'inspiration" in Hussein Bourgi (ed.), Jean Le Bitoux (1948–2010), passeur de mémoire (Lyon: Mémoire Active, 2010); and the booklet Magnus Hirschfeld (1868–1935). Un pionnier du mouvement homosexuel confronté au nazisme (Paris: Mémorial de la Déportation Homosexuelle, 2010), which I edited and to which I contributed a timeline of key dates in Hirschfeld's life and career.

A brief article I wrote about the French homophile journal Arcadie appears in the June 2010 issue of Tretter Letter, the newsletter of the friends of the Tretter LGBT studies collection at the University of Minnesota; to download the issue as an eight-page PDF, click here. My 3,000-word entry on LGBT archives and libraries in the United States appears in the reference work LGBTQ America Today: An Encyclopedia (Westport, Conn.: Greenwood Press, 2008).

My publications also include a French-language portfolio on the GLBT Historical Society in San Francisco published in volume 6 of Triangul’ère (Paris: Editions Christophe Gendron, December 2006), and “The ‘Modest Collection’ of Bud Flounders: How 5,400 Gay Novels Came to Green Library,” published in the fall 2005 issue of Imprint, the journal of the Associates of the Stanford University Libraries.

With Roberto Malini and Steed Gamero, I am the coauthor of Un Diverso olocausto (Florence & Milan: Arcigay Firenze/Visions, 2007). Half the book consists of my essay giving an overview of the Nazi persecution of homosexuals, translated to the Italian by Beatrix Rossi: "Dal'Eldorado al Terzo Reich: Vita et morte de una cultura omosessuale" (pp. 9-54). The book also includes reproductions of a number of historical documents and images from my collection.

I am a founding member of the GLBT Historical Society (San Francisco), where I currently serve as senior public history advisor. The most recent exhibition I curated for the society's GLBT History Museum focuses on the life, work and legacy of Dr. Magnus Hirschfeld; it ran from August 2016 to January 2017. I also served as lead curator for "Life and Death and Black and White: AIDS Direct Action in San Francisco, 1985–1990," an exhibition of photographs on display March–June 2012, and as one of the three lead curators for "Our Vast Queer Past: Celebrating San Francisco's GLBT History," the debut long-term exhibition in the museum's main gallery.

La mia bibliotecaMy collection focuses on nonfiction in all languages dealing with lesbian, gay, bisexual, transgender and intersex subjects published before 1970. I am primarily interested in books and pamphlets, but I also collect periodicals (particularly those in French) featuring substantial articles within my areas and period of interest.

Although I don't generally collect fiction, I do make rare exceptions: For instance, I'm a Magnus Hirschfeld completist, so my collection includes a copy of the Robert Hichens novel That Which is Hidden (1940), as the book opens with a visit to what is clearly Hirschfeld's tomb in Nice, and one of the characters is inspired by Hirschfeld's partner, student and protégé, Li Shiu Tong.

My full collection currently comprises some 3,000 items -- so my listings on LibraryThing.com are intended to provide only a snapshot of the range and depth of my holdings. In addition to my collection, I have a fairly extensive reference library of more recent books.