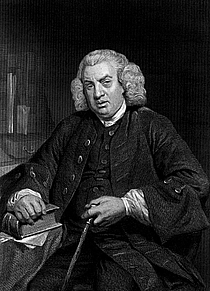 Informazioni su di meThe catalogue of Doctor Samuel Johnson’s books gives us some limited insight into the mind of one of the best-read men of the 18th Century. Johnson (1709-1784) grew up in his father’s bookshop and never left the world of books. He was himself the cataloguer of the great Harleian Library, and in the introduction to that work says:
“Nor is the use of catalogues of less importance to those whom curiosity has engaged in the study of literary history, and who think the intellectual revolutions of the world more worthy of their attention than the ravages of tyrants, the denotation of kingdoms, the rout of armies, and the fall of empires. Those who are pleased with observing the first birth of new opinions, their struggles against opposition, their silent progress under persecution, their general reception, and their gradual decline, or sudden extinction; those that amuse themselves with remarking the different periods of human knowledge, and observe how darkness and light succeed each other; by what accident the most gloomy nights of ignorance have given way to the dawn of science, and how learning has languished und decayed, lor want of patronage and regard, or been overborne by the prevalence of fashionable ignorance, or lost amidst the tumults of invasion and the storms of violence. All those who desire any knowledge of the literary transactions of past ages, may find in catalogues, like this at least, such an account as is given by annalists and chronologers of civil history…”

La mia bibliotecaThis listing is primarily based on the catalog for the sale of Doctor Johnson’s books following his death in 1784. It has been published several times, most recently in

Unfortunately, the auction catalogue is neither complete nor accurate. Here are some comments on the catalogue by A.W. Hutton, a 19th-Century scholar:

“… when we turn to the catalogue itself, it is but a very sorry production, sadly unworthy of the occasion that called it into existence. That the cataloguer of the Harleian Library should have had his own books thus catalogued is a melancholy thought, and makes one reflect on what may happen to any of us when we are gathered to our cataloguers and biographers. The first Christie, the auctioneer who is responsible for this catalogue, and who sold the books in Pall Mall in February, 1785, had resigned a commission in the navy in order to become an auctioneer. It is a pity he did not remain in the navy. Hardly an entry in the catalogue is free from mistakes; hardly any book is adequately described, so as to place the edition beyond doubt; some of the entries are so incomplete that the book is unrecognisable; while every lot contains a number of books that are not named at all. So that, although there are only 662 lots, I have found, by adding up the numbers in each, that 3,000 volumes were sold in the four days, not counting bundles of pamphlets, such as lots 631 and 632, which may have included scarce and very valuable matter. The sale too was sadly unproductive. The whole amount realised was £242 9s., being at an average of about nineteen pence a volume, a truly lamentable result, considering that the library included many valuable editions of the classics printed in the sixteenth century, and the first folio edition of Shakespeare, which, if in good condition, as it probably was not, ought to have fetched more than what the whole library went for.

So much for a general survey of this deplorable catalogue and this deplorable sale. If we turn now to sundry details, with the view of estimating Dr. Johnson's literary tastes by the contents of his library, we find, no doubt, an endless fund of entertainment, but we are precluded from drawing any definite conclusion by the fact that, while only about one-fifth of the books sold are named, Johnson, shortly before his death, gave away a number of books to his friends, though he somehow forgot to give any to poor Boswell. It is, however, natural to suppose that he would at such a time give away some of his favourites, though he was not an advocate of giving books away under ordinary circumstances. If an author wanted his books to be read, he should, Johnson thought, sell them at a low price, but not give them; for books given are not valued and are not read…"

In addition to Johnson's books which were sold at auction, a handful of books were bequeathed to some of his friends as per his will, and if identified, are included in the Library Thing catalog. Ten other acquaintances of Johnson were allowed to choose one book from his library. Mr. Cruikshank, a doctor from Leicester Fields chose Dr. Samuel Clark'e edition of Homer, four volumes in two, 1740-1754, which the author, Austin Dobson, later acquired.

Additional books from Johnson's library, some of which are identified in the following references, will be catalogued on Library Thing in the near future:

An excellent essay on Samuel Johnson's Library was written by Austin Dobson in the 1890s, and included in his 1894 book, Eighteenth Century Vignettes, Second Series.

On June 11, 1892, A.W. Hutton read a paper on Dr. Johnson's Library before the Johnson Club. It is included in the 1899 book, Johnson Club Papers By Various Hands.

In the Appendix to his 1923 book, Doctor Johnson: A Study in Eighteenth Century Humanism, Percy Hazen Houston included "An Account of the Sale Catalogue of Dr. Johnson's Library."

In his 1930 book, An Eighteenth-Century Gentleman and Other Essays, S.C. Roberts devoted a chapter to "Johnson's Books."

In 1975, J.D. Fleeman provided an introduction and notes to another facsimile edition of The Sale Catalogue of Samuel Johnson's Library. Fleeman reproduced the Sir Thomas Phillipps copy which is at Harvard, whereas Eddy reproduced the Newton copy, which is a facsimile of Col. Isham's copy.

We hear from Fleeman again in 1984 with his publication of A Preliminary Handlist of Copies of Books associated with Dr. Samuel Johnson. For brevity purposes, this reference will be referred to in the Library Thing catalog as the "Handlist of Association Books."

In 1993, J.D. Fleeman co-authored a book with Donald D. Eddy: A Preliminary Handlist of Books to which Dr. Samuel Johnson subscribed. For brevity purposes, this reference will be referred to as "Subscription Books."

Robert DeMaria Jr. informed LTer moibibliomaniac that his 1997 book, Samuel Johnson And the Life of Reading, can be mined to identify additional books belonging to Samuel Johnson. A paperback edition of this book was published in 2009.

LTer moibibliomaniac gave a talk about cataloguing libraries before the Florida Bibliophile Society in March 2009, and Johnson's Llibrary was one of the libraries he talked about: https://bibliophilesinmylibrary.blogspot.com/2009/03/cataloging-dead-peoples-boo...

In letturaThe anatomy of melancholy. : What it is, with all the kinds causes, symptomes, prognostickes, & seuerall cures of it. di Robert Burton