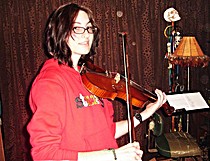 Informazioni su di meI am interested in everything, but not indiscriminately so. The search for knowledge is fine but you aren't completely educated until you know what information to reject as well as what to take in. At least that's what one of my professor's once said. Seems about right.

I like to read. B.A. in English Literature, B.M. in Violin Performance (in progress).

La mia bibliotecaMy library is a combination of both mine and my boyfriend's. We both pursued English Literature in college, so I think what we have is fairly reflective of that. The books not specifically Literature related are either there for research support or are related to other interests. I've gone back to university for a degree in Music, so I'm sure those will be making an appearance soon as we catalog everything for our records.

The rating system (haphazard) is based mostly on how much I liked a book at the time of reading it. So it doesn't necessarily reflect how I would rate it if I read it for the first time now. Such as the Harry Potter series, which has been pointed out on occasion. I happened to be the same age as HP for all of the first few books as they came out, and I received the first one as a gift while in England, so yeah, 11 year old me was riveted and thought it was the best thing ever.